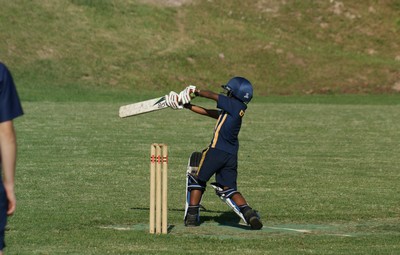 On 30 March, we held the first-ever, DSS Interhouse 6’s Cricket Tournament which was a great success.

In a 6’s tournament, the teams consist of 6 players each. The format was a limited overs match, consisting of 5 overs bowled per team. Each player, except the wicket keeper, had to bowl. The tournament was comprised of 4 matches: U/11, U/13, Senior Phase and FET Phase.
U/11 Result
In the first match Morris batted first and managed to get 23 runs in their 5 overs. Herman Meyer and Rudi Combrink each took two wickets, but Murray was unable to take the last wicket. Murray responded by getting the 24 runs needed to win, without losing a wicket and with more than an over to spare. Herman top scored. Murray won by 5 wickets.
U/13 Result
Murray batted first and scored 33 runs in their 5 overs, at a run rate of more than a run a ball. Morris was unable to take a wicket. Joshua hit a boundary during his innings and top scored for Murray. Morris then responded and scored 28 runs. Murray won by 5 runs.
Senior Phase Result
Murray batted first and scored 32 runs. Morris then replied. Although they did not lose wickets their run rate was too low and they managed only 24 runs. Lungelo Dube was particularly tight in his bowling for Murray and conceded only 3 runs from his 6 balls. Murray won by 8 runs.
FET Phase Result
Morris batted first and scored a respectable total of 33 runs. Game on. Sehliselwe Hlongwa scored 3 fours and 1 six in his total of 25 runs for Morris. Murray then responded and lost a few wickets early on. Jacques was bowled without scoring. Luke was runout with his score on 5. Matthias then dug in and scored a few runs to get Murray close to the finish line. However, he then lost his wicket. Ndumiso Dumakude came in as the last batsman for Murray. Morris needed 1 wicket to win and Murray still needed 4 runs. Ndumiso finished the match in style and hit a 6 during the last over. Murray won by 1 wicket.