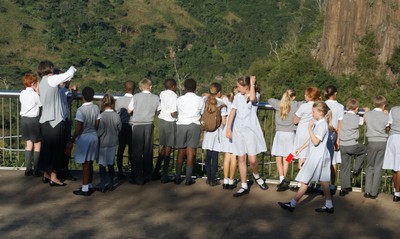 On Friday morning, 17 April, we waited for the bus to take us on an outing.

We were very excited because we were going to the Pietermaritzburg Fire Station, the Blood Donor Centre and Fairfield Dairy in Howick.

At the Fire Station we saw very interesting things. We even went into the call centre where we saw lots of computers and other screens. We got to see the man slide down a pole. We heard the largest fire engine siren. It is the biggest fire engine in the country. Luke, Elsi and Monica answered questions so they were allowed to put on a part of the fireman’s suit.
After the Fire Station we went to the Blood Donor Centre. We touched a blood bag with some blood. It was quite warm. Some of us were scared to touch the blood bag. I wish I was allowed to donate blood but only children above sixteen are allowed to donate blood. My teacher donated blood. It was gross.
Next we went to Fairfield Dairy. The guide showed us tanks containing milk. We saw the processing plant. We went in the places where they packed all the yoghurt and milk. It was amazing. We went in a place that felt as if I was in a freezer. It was cold.

We ate lunch at Saedie’s house. We ate a hamburger, chips and had something to drink. We played on the lawn and I stuffed myself.

Written by the Grade 4 learners
{gallery}2015/Term2/IPOuting{/gallery}