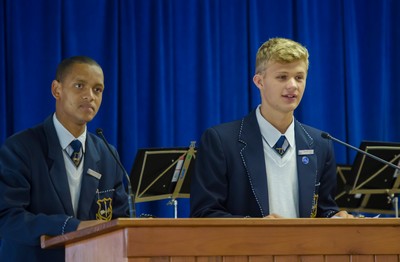 At our quarterly Award Assembly it was our pleasure to acknowledge learners who had achieved in Term 1 and at the end of Term 4 in 2014.

The proceedings were directed by Iliya Matveyuk and Nkosikhona Majoza, the 2015 Head Prefects. The Bible reading was done in English and Korean by Siwe Cele and Yeoju Na. Congratulations to the many learners had performed well in the Benchmarking Tests, Core Skills Tests and Subject Specific Tests which were written in 2014. A number of learners were awarded for their participation and achievements in the Natural, Life and Physical Sciences Olympiads.

Musical items were presented by all the DSS learners, in the form of singing or playing instruments.