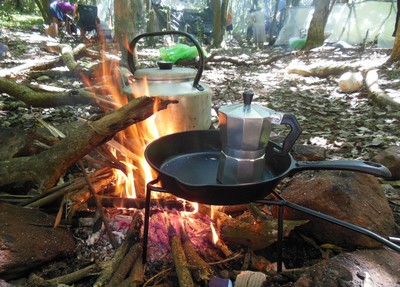 We were already regretting having packed too much stuff! Each of us were appointed a ‘buddy’ who had to accompany us everywhere. So the first experience together was the 9km walk to base camp. It was a ‘killer and a half’ and according to Christinah Masilela, it was the first time that she had walked such a long distance in her life!

On arrival we were given plastic, rope, sellotape and clothing pegs with which to build a shelter for the two days in the bush. Interesting architectural structures sprang up left, right and centre.

After nothing but a small snack to nourish us until supper time, we were ravenous. But, lo and behold, supper was Walky Talky! (chicken heads and feet). Fasting was not an option so without any other menu choices, we prepared our meal and nibbled gingerly.

We soon got the ‘survival’ part right: collecting firewood, building fires, washing in the stream, cooking, sleeping on the ground.

After much fun and countless memories, we made it back to civilisation and a long shower.