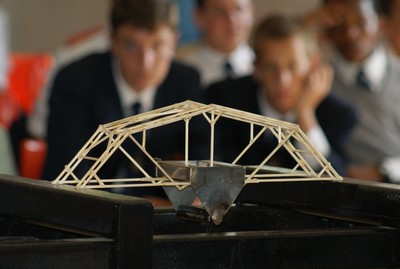 8 teams entered this year. Entry is voluntary. The teams that take first and second positions at school level qualify to enter the Regional Bridge Building competition which takes place in the third term.
At the school competition held on 13 February, the third position was taken by an all-female team: Esther Graf, Lisa Haux & Stefanie Wunderlich. Their bridge carried a weight of 40kg before breaking.
Jacob Allen, Daniel Bosman & Daniel Pop took second position with their bridge carrying a weight of 60kg.
The winners, by a slim margin, were Luke Allen, Johnny Pop and Janek Stegen. Their bridge carried a weight of 70kg.
With some time before the next competition to analyse the structure and weaknesses of their bridges, the boys can improve the strength of their bridges and hopefully get them to carry heavier weights to secure victory in the regional competition.