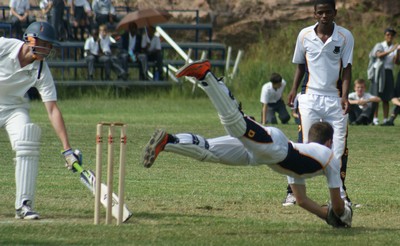 Iliya Matveyuk and Janek Stegen produced good bowling figures. The wickets were spread among all the bowlers. Almost half of HMB’s runs came from extras. The DSS opening batsmen started well but there was a top order collapse and it didn’t seem like we would make it, however, the partnership of Joseph Grobler and Luke Allen pulled DSS through. Joseph went out  for 21 runs of 13 balls but by then DSS had done almost enough to win. Luke eventually scored the winning runs with only two wickets in hand.