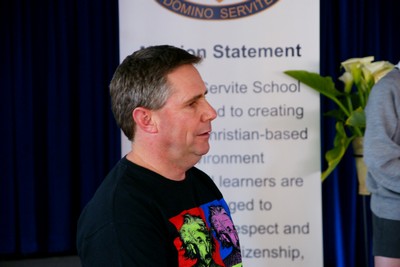 To keep an audience of learners and students mesmerized for about 90 minutes on a hot afternoon is nothing less than remarkable and even more so if the topic is ‘scientific’! Derek Fish demonstrated that there is nothing boring about science when he presented part one of the God and Science series at DSS on 23 September. His presentation was a sensational exhibition of sound and science.
Derek Fish, a music whizz, played many musical instruments from around the world which demonstrated the science of sound. His talk was augmented with live performances by learners who played various musical instruments including the violin, piano, trumpet, trombone, tuba and others. Derek supplemented these with his own unique performances on the nose-flute, musical straw and hose-pipe.
He concluded the presentation by sharing his testimony as a believing scientist, through the words of the well-known hymn: ‘How Great Thou Art!’ The audience sang the hymn while Derek accompanied on the accordion.
The next day, on 24 September, learners and students came back for more when Derek presented part two of the God and Science series entitled Nature’s Marvellous Maths where he explored the exquisite design, precise patterns & sublime symmetries in nature and numbers. It was great stuff!

Derek Fish is the director of the UNIZUL Science Centre (USC) which is one of the oldest and biggest science centres in the country. Check out what he is doing on www.unizulsc.com