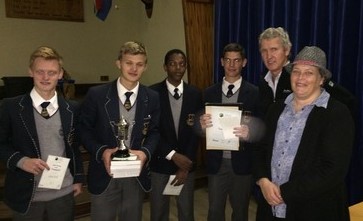 We entered two enthusiastic teams in the WESSA Environmental Quiz this year on 13 May.

A well-studied and confident A team consisted of Joseph Grobler, Iliya Matveyuk, Philip Meyer and Ndumiso Mkhize. Esther Graf, Maria Fourie, Lugisile Mapumulo and Estelle Pretorius made up the knowledgeable and hopeful B team.
Miss Leach nervously assisted on the scoring panel and Miss Vosloo tirelessly cheered our teams on from the audience. The competition started at 18h30 in the Greytown High School hall. 9 teams from Hermannsburg, Wembly, Greytown High, Greytown Secondary and DSS competed.
The quiz was fun, interesting and fully packed with environmental and wildlife questions. There were rounds of quick fire questions, pass-on’s and other rounds which included images, sounds and objects found in nature. If the learners could not come up with an answer it was thrown to the audience where expertise was revealed for the prize of a chocolate. We had a comfort break halfway through and the girls had great hopes of winning as they were in the lead, but, although the contest ended very closely, the B team tied in 4th position. The A team also ended in a tie but with one more “sudden death” question they were raised to glory and the first position was theirs!
Congratulations to both our teams. The name of our school will now be added to The Wizard Worms floating trophy.
The national competition will take place in Pietermaritzburg on 1 August.