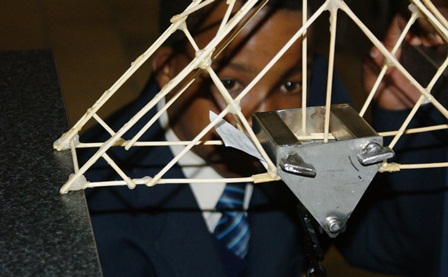 We build bridges at DSS. We build them everyday between different nations, cultures and races but those are different to the bridges we built at the DSS Bridge Building Competition held on 8 February. There was a very enthusiastic response from girls’ and boys’ teams. The strongest and most well-designed bridge carried a weight of 70kg before collapsing. The architects of this bridge were Petrus Fourie, Joseph Grobler and Iliya Matveyuk. Well done!
The bridges that took second and third places carried weights of 50kg and 40kg respectively. The 50kg bridge belonged to Luke Allen, Johnny Pop & Janek Stegen and the bridge that took third place was the design of David Geldenhuys, David Graf and Heinrich Marloth. These three teams will proceed to the regional competition later in the year.