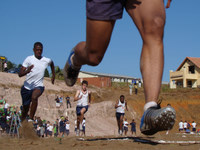 Athletics
Interhouse
The new field was ready for the Interhouse Athletics meeting held on 1 and ? October, albeit a bit sandy. Thank you to Mr Karl Heinz Duvel and those who so ably assisted him.

Highlights
With the track being on the sandy side one did not expect many new records to be set. However, 22 new records were set and one was equalled. 11 of those records were track records, most of them in the junior age categories. André Engelbrecht improved the Boys 14 years 200m record by almost a whole second to 26,6s on the sandy track! He also set a new record in the 100m event. Another impressive performance was that of Timothy Olsen who improved the Boys 15 years Javelin record by more than 3m to 46,33m. Mamazane Maphanga cut off almost 30 seconds from the Girls 19 years 3000m event with her time of 14:09.9. Both Jaco Coetzee and Joshua Lopes improved the Turbo Javelin records in their respective age groups by a number of metres.

Zonals
We entered a record number of 120 athletes for the Northern Natal Zonal athletics meeting. Other schools that competed were Faith Christian School from Newcastle, Estcourt Christian Academy, Ichthus Christian School from Dundee and Bergville Christian Academy.
There were age category awards for boys and girls in U9, U11, U13, U15, and U19. Domino Servite won all the awards except for boys U9. The age category winners were as follows: Girls U9 – Phumelele Khumalo
Girls U11 – Sara Knieper
Boys U11 – Heinrich Marloth
Girls U13 – Anitha Engelbrecht
Boys U13 – Gabriel van Eeden
Girls U15 – Sikhanyile Ngubane
Boys U15 – Gabriel Maphanga
Girls U19 – Dorcas Maphanga
Boys U19 – Marc Stegen
Gabriel van Eeden won the award for the best male individual performance for his score of 885 in High Jump and Sara Knieper for the best female individual performance for her score of 715 points.
Those who qualified represented Northern Natal at the KZNCSSA Provincial Track and Field Championship.

Provincials
A record number of 95 athletes proceeded to the KZNCSSA Provincial Track and Field Championship. A total of 128 medals; 48 gold, 39 silver and 41 bronze were won.
5 KZNCSSA records were broken and one was equalled. Joshua Lopes set a new record in Boys 10yrs Turbo Javelin with a distance of 29,73m. Nkazimulo Gingqi set a new record in Boys 14yrs Discus with a distance of 30,33m. Timothy Olsen set a new record in Boys 15yrs Javelin with a distance of 46,85m. Dorcas Maphanga set a new record in the Women Youth 200m event with her time of 28,0s and Mamazane Maphanga set a new record of 5:48,7 in Women Junior 1500m. Heinrich Marloth was the Junior Victor Ludorum with a total of 3078 points. Gabriel van Eeden was in second position with 2857 points. He did very well in High Jump. Dorcas Maphanga was awarded Senior Victrix Ludorum for her total of 2552 points, having won gold in all four of her events. S’khanyi Ngubane was 5th overall. Gabriel Maphanga was joint Senior Victor Ludorum with Caleb Bouchier from Victory Christian Academy, both having accumulated exactly 3200 points. Not far behind them were Mark Stegen in 4th position and Nkazimulo Gingqi in 5th position. Northern Natal won the trophy for the team with the most points after Durban North led for most of the competition.

Nationals
52 athletes proceeded to represent KZN at the aQuellé SACSSA National Track and Field Championship. Mamazane Maphanga was appointed as one of the KZN team captains. This competition was at its highest level ever with a record total number of entries. Athletes came from as far afield as Zimbabwe. 10 regions were represented, namely the Free State, G7, Gauteng, KZN, Limpopo, Mpumalanga, Southern Cape, Vaal West, Western Province and Zimbabwe.
Domino Servite athletes won a total of 41 medals; 15 gold, 15 silver and 11 bronze (excluding the relays.)

Prisma Comms
24 athletes were invited to represent SACSSA at the largest inter-club athletics meeting in South Africa – the Prism Comms Track and Field Championship in Pretoria. Unfortunately only nine athletes were able to accept the invitation. SACSSA won only six gold medals of which two were won by Domino Servite athletes. Jaco Coetzee won gold in Boys 11 Turbo Javelin with a new PCA meeting record of 32,61m and Mamazane Maphanga won gold in Women Junior 5000m. Gabriel van Eeden won silver in Boys 13 High Jump with a height of 1,5m and Nontokozo Buthelezi won bronze in Women Junior Long Jump. It was a great privilege to compete against some of the country’s top athletes.

Conclusion
We have had a long and successful athletics season. We need to build on our successes and improve the quality of our training and performance.