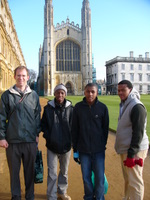 The requirements for the 2008 Technology Olympiad were to design, build and test a self-propelled earthmoving machine which could move plaster sand between two points across a flat horizontal surface three meters apart.

The machine had to comply with certain specifications:

Six teams from Domino Servite participated in the regional leg of the SAIMechE Technology Olympiad in Durban on 23 August. The Ambassadors – Jonathan Lopes, Mbukiseni Ndima and Claude Peters came first and DSS 2 – Nkululeko Hlophe, Mxolisi Mthembu and Sakhile Radebe, fifth. These two teams were selected to participate at the National competition.
The National SAIMechE Technology Olympiad was held on 27 September at Jeppe High School for Boys in Kensington. The hard work began early Saturday morning with interviews, judging of the earthmovers and the reports. After lunch, a surprise workshop tested the skills they had gained during the year. The day ended with an awards dinner for team members, educators, facilitators, invited guests and donors. Adrian Arnold from Hatch and Ivan Terblanche from Bell Equipment inspired and motivated the learners to follow a career in engineering.

Each team member then received his/her certificate of participation and medals. Domino Servite’s DSS2 came first. They won a first year engineering bursary, an overseas trip to engineering companies in England as well as AutoCAD software.

The runner up team was from PROTEC in Tongaat, KZN. The Ambassadors came fourth. Congratulations.