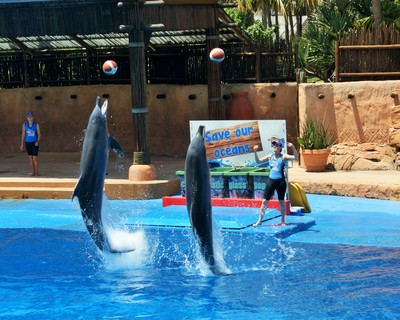 It was a very relaxed drive, as one of the learners said; “We are driving so slowly, when other trucks overtake us, it feels like we’re reversing…”

On arrival everyone wanted to know when we were going to see the dolphin show, but it was off to the aquarium first, which is housed in an old ship.  The tour guide shared some valuable information about sea life and all its creations and creatures. Most learners listened attentively and had some interesting questions to ask the guide, which she answered with great skill.

After the aquarium, we visited the penguins. They were all huddled together and most children wanted to know why they were not swimming. The guide explained that they only really go into the water when they are fed. However, just before we left them, one of the penguins demonstrated his diving skills – to the amusement and glee of all the learners.

Eventually, we marched to the dolphin show. This was thoroughly enjoyed by the children who all wanted to be a part of the show. Another highlight for the children was the Kids Playworld where they could kick off their shoes and socks and run around wildly, climb up and down jungle gyms, slide down straight and twirling slides and even run explore some man-made caves. We then enjoyed a filling meal at Wimpy.

All and sundry certainly had an enjoyable, educational and exhausting day.