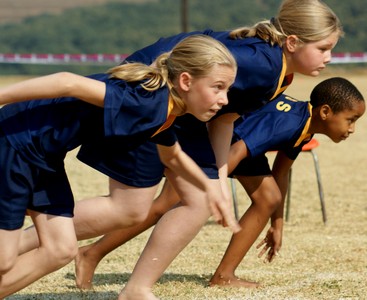 It was Morris and Murray who once again faced each other on the sportsfield on 9 August!

The last time these two heavyweights clashed was at the Interhouse Cross Country competition, however, the Interhouse Athletics Meeting is a major event where the tussle was on for the coveted Winning House Trophy.
It was oranges and limes this time round! The team leaders and mascots most certainly looked the part. With leafy hats and bulgy, rounded little bodies, the mascots looked like freshly picked oranges and limes! Morris led the march onto the field this year as the current house champions with Murray in the rear. But this pattern changed as the day wore on.
Murray emerged as the final winner with a total of 2503 points and Morris, the runner up with 2452 points. The Cheering Trophy was also won by Murray.