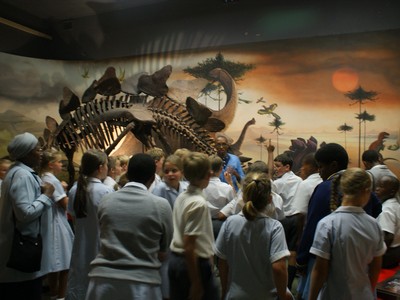 Our first destination on the IP Outing on 11 April was the African Bird of Prey Sanctuary just outside of Pietermaritzburg. We arrived at 09:00 and were warmly welcomed in by Shannon and her team.

The children walked around the park looking at the large variety of birds housed in massive cages. We saw the African hawk eagle, the Yellow billed kite, the African pygmy falcon (a personal favourite) as well as many other eagles. There were a number of owls as well as vultures. This astonishing collection of birds of prey requires no less than 2000 baby chicks per week to satisfy their hunger. With so much to see, time was also flying and the highlight of the visit, the bird show, was about to start. The learners were eagerly perched on the stands in the outdoor arena waiting to see the predators in action. First up was Roxy, the sleek and agile Goss Hawk. Her dramatic entrance wowed the children as she flew in from behind us and landed on Shannon’s leather glove. Her speed and accuracy was displayed as a leather bag was dragged along the floor at high speed, she swooped in and thumped her claws into the moving target. Roxy the Goss Hawk was a great way to start the show.

Next up was Alpha the Spotted Eagle Owl. He glided effortlessly in perfect silence, demonstrating himself to be the master of stealth. The third aerial master was the Yellow Billed Kite. As Shannon threw small pieces of raw chicken into the air, the kite had no difficulty in catching the mid-air treats and eating them while in flight.
The fourth bird of prey came hopping in along the ground in front of the children. It was the Pale Chanting Goss Hawk, an amazing bird that uses his long springy legs to scavenge for scraps of meet on the ground. Shannon had placed small pieces of raw chicken in between the legs of the children sitting in the front row and in the nearby bushes. We could see how this predator had the best of both worlds, the air and the land, using excellent eye sight to quickly find every scrap of meat.
The fifth bird was a very old Barn Owl. Elsabe Pienaar volunteered to gently push her fingers into the fluffy feathers to demonstrate just how small the Barn owl’s body is.
Last of the aerial displays was a creature worthy of a special mention. This is the fastest, quickest and speediest animal by far. The Peregrine Falcon shot past the crowd of children and up into the air. Diving and bombing towards a swinging lure in Shannon’s hand, collecting sizable treats for each darting effort. The speed of this bird was incredible.
We then moved into the deadly domain of the seven hungry vultures. No time was wasted as the bloody flesh was ripped and swallowed in a frantic rush by the vultures. Because of nature’s fight for survival and the demand for meat, food is eaten very quickly and then stored in the crop, where it is later digested. Shannon explained that the birds bath after every meal because they become very hot as a result of all the activity and the blood rushing down to their heads. The battle for flesh came to an end and the children thanked Shannon and the team and we made our way back to the sprinters.
The next stop was the KwaZulu Natal Museum. What makes the museum such a special place to visit is that it has been open to the public for over one hundred years and many of the life-size exhibits are used to directly enrich school curriculum, such as: San Hunter gathers, Life in Water, Mammals, Dinosaurs and many others.
Our tour of the museum started with an overload of excitement and information, as the children spun round in the main exhibit, displaying the Big Five and many more carefully placed animals. Life size models of elephants, rhinos, giraffes, hippos, zebras, lions, buffalo, okapi, hartebeest, dromedary camels, cheetahs, leopards, antelope, many types of gazelles, impala, springbok, water buck, jackals, foxes and much more.
Our tour guide channelled us into to the depths of the ocean to examine life in the water and then back out to dig for fossils in the ancient dinosaur exhibition. We experienced the life of English settlers in the 19th century Natal in the Settler History Gallery as we strolled down a recreated street from central Pietermaritzburg during the last half of the 1800’s. The street boasted a dressmaker shop, a hairdresser, a pharmacy, an old house and the rooms inside as well as a forge which was used for making weapons at one point. All the artefacts on display were original and 100% authentic, making this experience a true highlight of the tour. Every detail was examined by the children as they wandered beneath the dim street lamps of the past.
From there, we went into a Drakensberg cave occupied by the San Hunters and Gatherers. The display of rocks and tools, artwork and techniques was very comprehensive.
Again, time had flown by and we had to depart without having fully experienced this amazing museum. The children still wanted to see the Snake display, the Spice of Life, the Stone Age display and many other impressive exhibitions. The one and a half hour bus ride carried us safely back home.
C Thompson