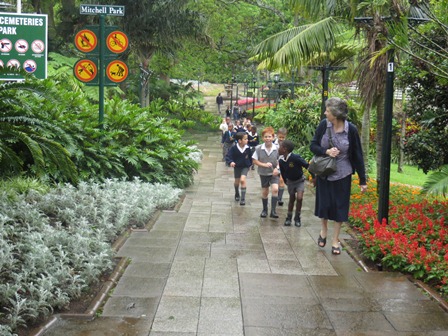 A very excited bunch of learners gathered outside the school hall at 7 am on 15 November.

Some learners greeted the teachers with a, “Mam, I couldn’t sleep last night. I am so excited!” or “Mam, I woke up at 5 already, I couldn’t wait anymore!”

After only a few kilometres on the road, some had already finished their quota of snacks and drinks for the day. A few got car sick but with the plastic bags we were able to avoid too many disasters!

It was a very long drive to our first stop in Kloof to see the steam train. Teachers had to answer a hundred of the one and only question that was asked, “How far still to go?” This question started soon after we left school. We learnt many interesting facts about the train. It was the first steam train in South Africa that ran between Durban and Pietermaritzburg in the early 1900s. It was a 7 hour journey between Durban and Pietermaritzburg by train which was considered fast since the same route took 11 hours by carriage and two weeks by ox wagon! The experience at Kloof was worth the long drive!

Our next stop was Mitchell Park Mini Zoo. Unfortunately the visit was cut short due to heavy rain. However, the learners did not mind the rain as much as the teachers did. In fact they enjoyed the getting wet part almost more than watching the animals. The huge turtles and beautiful bright red birds were a sight to see.

Before heading home, we stopped at McDonalds for a late lunch of burgers, chips and drinks. The learners still had loads of energy after such a long day. On the way back, the one and only question that teachers answered a hundred times was, “Mam, when are we home?”