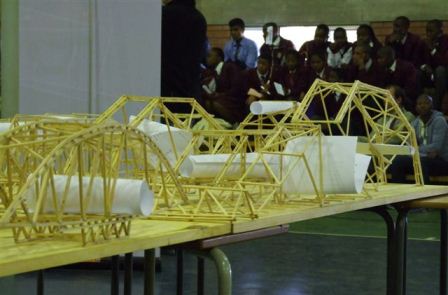 The teams were required to build their bridges from wooden sticks and epoxy glue. The sticks measured 4 by 4 by 600 mm. The bridges were required to span a gap of more than 760 mm. A mechanism using a crank and pulleys was used to weigh the bridge.

Janek Stegen, Luke Allen and Johnny Pop tested their bridge first and it carried a weight of 176, 2 kg before it broke. Thereafter, Petrus Fourie, Iliya Matveyuk and Joseph Grobler tested their bridge. When they reached 220 kg, an aluminium bar that was part of the mechanism bent. The bar was bent straight again but when they tried to test the bridge again the bar broke at 167 kg. The bridge was still intact.

The two bridges attained first and second position, earning the learners and the school some cash prizes. The winning team will now continue to the International Bridge Building Competition held in Pretoria.