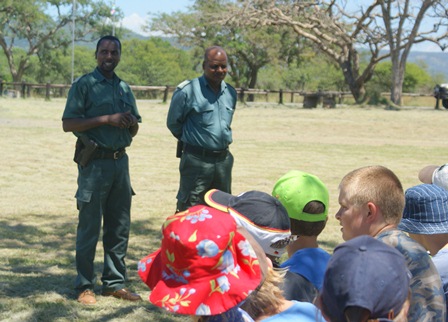 As part of the educational program, the Intermediate Phase learners visited the Greytown Museum and the Weenen Game Park on 22 February. The Museum was the first stop where the learners could look at all the ‘olden day stuff’. It is divided into rooms such as The War Room, The Bedroom and various items related to the room theme were displayed. The washing machine and the gramaphone were among the more intriguing items. The museum has quite a lot to offer considering its size.

The next and final stop was the Weenen Game Park situated just outside of Weenen. On arrival the learners changed into more comfortable clothing. We were addressed by Chief Warden, Mr Raymond Zikhali. He explained how the park came into being and what types of animals could be found in the park. He answered questions especially about poaching. The park is home to a number of black and white rhino which are currently highly sought after by poachers. We were taken on a game drive a few kilometres into the park. We spotted quite a large variety of game. We stopped at Mtunzini picnic site for a braai. The learners could explore and play. enjoy a delicious lunch and then it was time to head home again. On the way out we spotted a number of rhino which was the cherry on the cake!