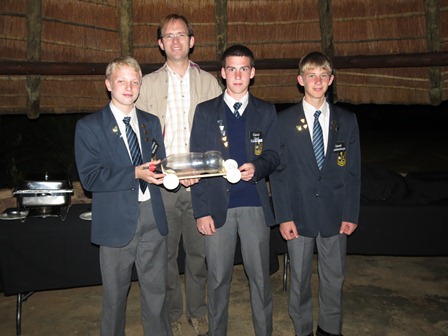 Team Phutuma was invited to participate in the National Competition, which took place at Camp Discovery, Pretoria, from 28 – 30 September 2012. They competed against eleven teams from various provinces.

Their first task was a surprise workshop wherein the teams built a Lego cable car which had to travel the furthest possible distance along a suspended cable. Saturday morning brought two more surprise workshops: model toys created from a heap of recycled rubbish materials and the design, construction and operation of a wooden frame and tin bucket with which to scoop as much water as possible within one hour.

During the afternoon the teams tested their jet propelled vehicles and were interviewed by two of the judges. This was followed by the prize-giving ceremony, which included a history of land speed records and the planned land speed record challenge due to take place in South Africa. The winners’ results were obtained from an accumulation of results from: the surprise workshops (45%), the testing of the vehicle (25%), the interview (10%) and the design of the car (20%).

Team Phutuma from Domino Servite won the National Technology Olympiad. They were each awarded a laptop computer and received an invitation to attend the record breaking attempt at the land speed record at Kalk Pan in the Northern Cape in 2014.

In many ways this triumph came as a surprise, since Team Phutuma’s vehicle broke during their testing runs at both the regional and national competitions. At nationals, however, they managed to fix their machine within their five minutes allotted time and still make the second best number of runs – thirty, which was only four runs behind the best team. This was a remarkable feat which reminded us that we need to persevere, even under trying circumstances.