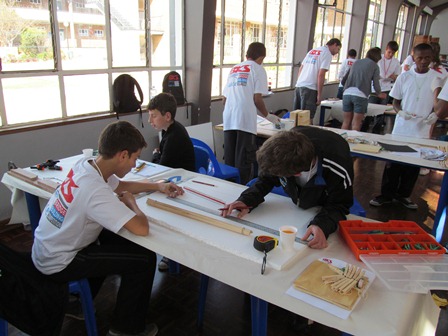 The SAICE National Bridge Building Competition was held on 23-25 August at St Alban’s College in Pretoria. Luke Allen, Johnny Pop and Janek Stegen represented the school at the competition. The wieghing of the bridges took place on Friday evening and Domino Servite won the competition for the third year in a row. The boys’ bridge carried 87 kg and the bridge achieving second place carried a weight of 75 kg. More importantly, the DSS bridge was lighter than the second placed team and this enabled DSS to win with an overall score of approximately 40 points.