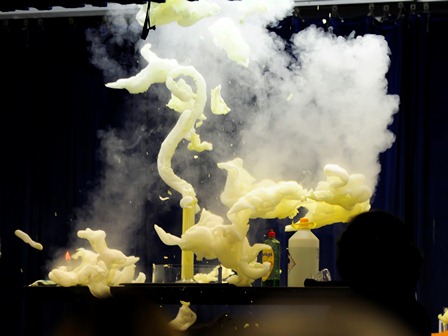 On the evening of 21 August, 6 teams competed for the honours of the DSS Natural and Life Sciences Fair. The competition consisted of four quiz rounds. In the first round, three of the six teams were knocked out in a multiple choice question quiz. In the second round, teams had to identify animal sounds. In the third round they were required to identify chemicals. Finally, each learner had to answer a question of his/her choice.
In between the rounds Mr du Toit demonstrated some fascinating chemical experiments. The winning team of the evening was, ‘The Best in the West.’ The team members were David Geldenhuys, Caleb Thiem, Rina Geldenhuys and Cameron West.