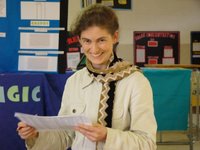 Over half of the school, namely 152 learners, participated in this year’s inhouse Expo for Young Scientists competition. 42 of these are better described as little scientists. Thanks to Mrs Stegen’s campaign to promote scientific investigation amongst the Foundation Phase children while using Intermediate Phase learners as mentors, the competition extended its already considerable influence into the lower reaches of the school. A colourful array of posters and presentation displays, manned by eager, bright-eyed youngsters, enlivened the hall on 2 June. A panel of judges, composed of Cedar College of Education lecturers, Domino Servite teachers, and some other volunteers, interviewed and evaluated the budding scientists. Besides the award of 1st, 2nd and 3rd class stickers, book prizes were given to particularly outstanding projects per phase. The Foundation Phase prize was won by Karl and Lisa Haux, for Finger Fun in which they tested the hypothesis that members of a family are likely to share the same finger-print patterns. The Intermediate Phase award was taken by Heinrich Marloth, for Grab it, in which he compared girls’ and boys’ reaction times. The Senior Phase award was shared by learners of three project: Ian Botes for investigating factors affecting a tribochet’s range, in Tossed, Joshua Cele for his agricultural investigation Monocropping vs Intercropping and Timothy Olsen and Daniel Rice’s comparison of the ease of keying out green versus blue screens during movie making, in Chromagic. No awards were given in the FET phase since these learners were not expected to display their projects in full for the school-level competition.

66 of these learners were chosen to represent the school at the FFS Durban Expo for Young Scientists. 52 of these ended up actually participating in the event on 7 and 8 August. Amongst them they displayed 34 projects. These collectively covered a wide spectrum of topics. The 11 Physics investigations entered included Gabriel Khwela’s Modroc, a study in the factors affecting rocket performance. Three Chemistry projects were done, with Gcinile Mhlongo and Engela Basson’s Glue the Milky Way, a study into properties of home-made milk glues, earning the most positive reaction from the judges. The seven botany projects included Dycorootz, done by the veteran investigators Nontokozo Buthelezi and Mary Tselane, whose study of silicate on the growth of beans won them a first class medal. Only one project was entered for zoology: S’khanyi Ngubane and Melissa Schneider’s attempt to rid their roses of aphids. The two microbiology projects included a study into the effects of detergents on the development of resistance in yeast populations, done by matrics Vukani Khanyile and Nkosikhona Khuzwayo. Four projects were entered in the Human Biology and Medicine category and two in the Commercial Products Studies section. Notable among them was Madeli Marloth and Maria Pop’s finding that bush tea moderates blood pressure. Predictably, the technology whizzes Mxolisi Mthembu and Bonumusa Nkala entered an invention of theirs in the Design, Engineering and Technology category. Jonathan Lopes and Jabulani Luthuli participated in the Construction, Design and Technology division, with a project about electric motors, titled From strength to strength. Two Social Science projects, and one in the Electronics and Robotics section rounded off the Domino Servite quota.

Eleven of these 34 projects were awarded first classes, five second classes and nine third class awards. Additionally, five projects were awarded Most Promising in Category awards and two Participation Recognition prizes. Learners who won these included Gabrielle Huber for Spectacular CO¬2, and Christabel Khwela and Nomsa Mabasa for Can u ges?

Further, Cornelis Grobler and Louis Geldenhuys’ Specific Heat Capacity, was awarded a bronze medal. Amongst other findings, these learners discovered the surprising fact that molar specific heat capacity is independent of element type. The crowning achievement was made by Simiso Ngubane and Benjamin Schneider, who scooped a silver medal, and an Engineering Award book prize for their outstanding investigation of aerodynamic principles in wing and car structures, in their project Pro Flo. These four learners qualified to participate in a tour of sites of scientific interest, sponsored by FFS, in the September holidays.

The spectacular 2008 performance is once again tribute to the thriving culture of scientific investigation present in Domino Servite, as well as the wonderful spirit of dedication amongst the learners. Long may that live.