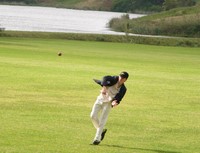 After having lost all our matches last year, the 2008 season seemed to be heading in the same direction after we were convincingly beaten by Greytown High School early in the first term. But the boys turned the tide and accomplished the improbable – they beat Hermannsburg Deutsche Schule by an astonishing nine wickets.

After tasting victory we ventured into unknown territory and played against Victory Christian Academy. After a competitive start we let ourselves down with the batting, finally losing by 76 runs.
This is the first year that there were enough players to put together a second team. They played one game against Greytown High 2nd team. Though inexperienced, they performed manfully.
We look forward to improving our success rate next year. We hope to stage home games and we really look forward to seeing the home crowd coming out to support us.
Mr W du Toit