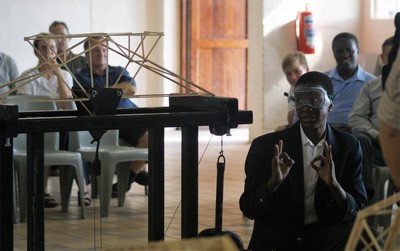 7 bridges were built and entered. All the bridges are broken but obviously the bridge that carries the heaviest load wins the day.
The team that took 3rd was the 2018 national winning team of Monica Allen, Nadine Engelbrecht & Elsi Haux. Martin Graf, Mark Haux & Evan Hanekom took 2nd place. Their bridge carried a load of 100kg. But the prize was awarded to the bridge that carried 119kg which was the product of builders Nozuko Magqabi, Stephanie Schnitzer and Nicola Wunderlich.