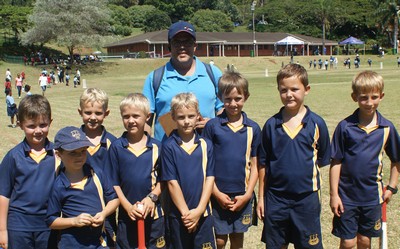 Approximately 200 boys and girls took part. Scores are kept and continuous training and coaching takes place during the matches. Every player bowls 6 balls and faces 6 balls for batting, therefore matches are 8 overs long. A player may be out through being caught, bowled and run out, but not by LBW and may continue playing until he has faced his 6 balls.
DSS played in the 9,10 age group. The runs scored are divided by the number of wickets to determine the score.
DSS vs Impact Christian Academy. Impact scored 12 runs and lost 7 wickets, giving them a score of 1.7. DSS scored 70 runs and lost 1 wicket, giving them a score of 70.
DSS vs Kingswood Academy. Kingswood scored 53 runs and lost 3 wickets, scoring 17.6. DSS scored 48 runs and lost 4 wickets, scoring 12.