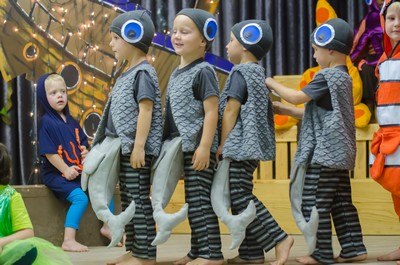 The Pre-primary’s annual stage drama this year was a fishy business!

On 19 September the children performed The Rainbow Fish, based on the story by the same name written by Marcus Pfister. The most beautiful fish in the sea is asked to share one of his beautiful shiny scales with a little blue fish but he refuses. All the other fish in the sea leave him alone to play by himself. He wonders why. He visits the wise octopus for advice, and he tells him to give away his scales. Rainbow Fish reluctantly does so, except for one. In the end, he is less beautiful then he was before, but he has new friends and is now the happiest fish in the sea.

The ‘ocean’ was a delight to the senses with coral, clown fish, star fish with many other sea creatures as well as an array of brightly coloured shells and crabs. All the sea creatures played their roles beautifully making the event and unforgettable experience for the children and parents!