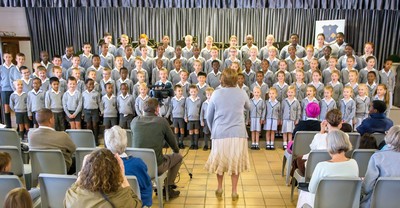 The final assembly for the third term took place on 21 September at 9h00.

There is a sense of excitement that is felt at every award assembly, obviously because it heralds a term break; it also signifies the end of a term of work which is reflected on the term reports which are handed out immediately after the assembly. Whatever the reason, this term was no exception.
Prefects, Qiniso Gingqi and Siyabonga Khumalo, ably handled the proceedings. Senior Phase learners, Thobeka Goqo and Anneli Engelbrecht read from Revelation 7 in English and Afrikaans. The learners sang, they played instruments and they received awards.
We love to award our learners for a job well done. They worked well, they played well and did us proud.