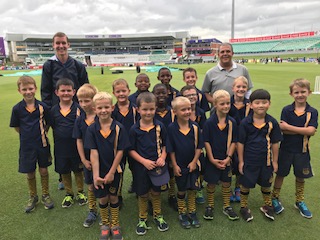 On 17 March 2 Mini Cricket teams participated in a festival at Kingsmead Cricket Stadium.

The teams were in the 6-8 and 9-10 age groups. Mini Cricket rules were followed where each player gets to bowl 6 balls and face 6 balls, irrespective of how many times he is out, during the 6 ball over. Each team played two matches. Both teams played their first matches against Kingdom Heritage, winning both matches. The 6-8 age group then played against Kingsword Academy and the 9-10 age group against Durban Christian Centre School. They played very well again and won their matches.
The players had great fun playing at the home of the Dolphins Cricket team.