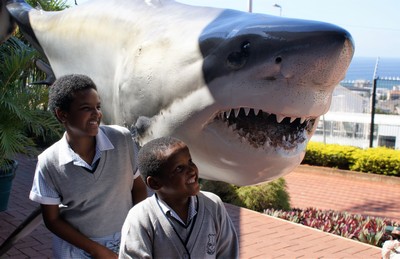 It was an animal lovers day! The first stop was the KwaZulu-Natal Sharks Board in Umhlanga where we were treated to a shark dissection and a stunning movie on sharks and the work of the Sharks Board. There are good reasons for having the dissection outside because the smell of a dead shark is powerful! The presenter showed us the shark’s snout which is certainly one of its most impressive features. It is filled with a jelly-like substance that can sense the slightest traces of blood or animal odours. Sharks never run out of teeth, if one is lost, it is simply replaced with another from the rows of backup teeth.

At the Umgeni River Bird Park we were treated to a large selection of birds which are well displayed in suitable cages. We had a satisfying lunch at the Cockatoo Cafe and thereafter attended the 2pm free flight bird show. In this show we were introduced to trained birds. Scratch was a beautiful, soft barn owl. Einstein, a 1-year-old stork climbed onto his trainer’s head! The show was certainly a highlight of the day.

The outing was concluded with an ice-cream, courtesy of McDonalds.