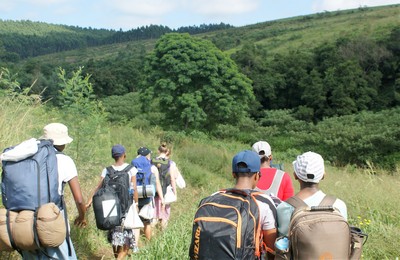 On 9 February, the Grade 10 girls set off with their teachers on the long walk to adventure.

The clouds sheltered us from the hot rays of the February sun and a breeze eased the physical effort of carrying the backpacks. The noise of happy chatter filled the air as the pack strolled down the dirt road to the hothouses, then down the other side of the hill, passed vegetable gardens, water pumps, into the forest… The 2017 Adventure Camp had started!
The girls were required to build a shelter in which to live. Each one proved strong enough to last until the end of the camp- which is not a given! Although the weather was merciful during the day, the first evening turned out to be a rainy and a muddy one. The clay ground became so slippery that any trip to the small stream became hazardous. Due to the unceasing rain, the evening program had to be kept short, but all enjoyed the testimonies and the talks around the fire.
The learners enjoyed the interesting culinary experiences, from “walkie talkies” to live chickens which were slaughtered, cured and turned into a tasty stew. Activities centered on creative thinking, effective communication and groupwork. The last evening was thankfully drier than the previous one, and ended with the traditional marshmallow-and-chocolate braai without which the camp would be incomplete. Returning home under a blazing sun made us thankful that up until then the rain had brought us not only discomfort, but also cool temperatures!