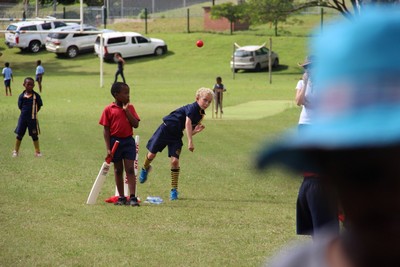 It was a first for DSS at the Mini Cricket Festival hosted by VCA on 12 March.

Teams consisted of 8 players. Two bowlers were given 8 minutes in which to bowl as many balls as they could to two batsmen. If a batsmen was out, he could not leave until the alloted 8 minutes were over. His partner then faced the balls. Both batsmen stayed in for the duration of the 8 minutes, no matter how many times they were out.
No wide balls or no balls were counted. Batsmen could be only be bowled, caught or run out.
DSS played their first match against Glenwood Christian School, scoring 72 runs to Glenwood’s 37 runs.
The festival was stopped earlier due to a “parking accident” which occurred halfway through the first set of matches. All participants received a medal from KZNCSSA.