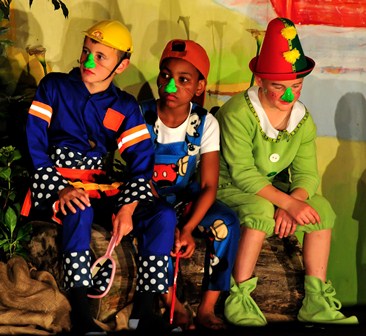 “Not bad, not bad, green noses for everyone!” became the motto of teachers and learners, in fact almost the entire school was eventually thinking about noses, painting noses, fitting noses and putting on noses! Yes, it was all about noses this year in our Junior School Stage Production which took place on 27 October.

Based on Max Lucado’s wonderful tale, “I wish I had a green nose” our production certainly brought home the message that God created you for a reason and He’ll always help you to be you.

Wemmicksville is a town of wooden toys which have been carved by Eli, the Great Toymaker who lives on a hill high above the town. Willy Withit arrives in town with great pomp and ceremony and convinces the toys that they would improve their looks if they followed his latest ‘withit’ – green noses. So the entire town goes green which makes Punchinello and his two friends Woody and Splint look different-weird. Pressurised by the crowd, Punchinello, Woody and Splint get their noses painted green and they feel great to be ‘withit’, initially.

But fashions change. Green noses went out of fashion and red noses were in. All the townsfolk had their noses painted red to be in with the latest ‘withit’. But that also did not last very long. Soon the red noses were out and the next colour came in. Punchinello and his friends soon discovered that to be ‘in’ and not ‘out’ was hard work. They were so busy keeping up with the latest ‘withit’ that they lost all contact with their Friend and Maker, Eli.

But one day Punchinello said, “That’s it, I should have listened to Eli!” He and his friends found their way back to their Maker who said, “I’ll always help you to be who I made you to be.”