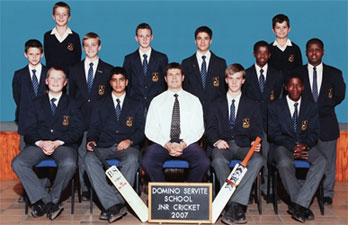 During the first term the Junior Cricket team played three matches. The first game, against the well-known Wembley College, was an outstanding match with a nail-biting finish. Wembley opened with a total of just over 100. Domino Servite chased the total and in the end lost by only 7 runs. It was the first time that the Junior team scored over 100 runs in a match. The high score can be attributed to good bowling and batting performances. The young cricketers were ecstatic and in very good spirits all the way home.

In the second match against Hermannsburg, the batting performances were not as good and we drew the match with a total of 41 runs. Needless to say, this match also provided great excitement with a finish that could have gone either way. In the last match the Junior team played against the teachers and a few elected players. Although they lost, we all had great fun. The learners cheered their players, as well as the teachers who were playing. We have a number of promising cricketers among the junior boys and we are looking forward to watching their progress in the coming seasons.