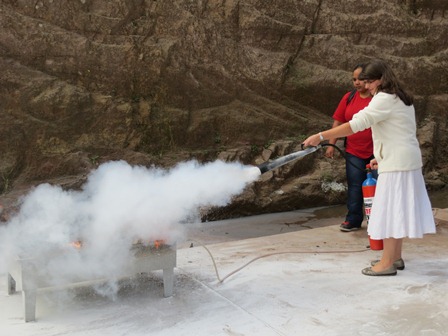 On 11 May four DSS staff members joined other locals to learn the basic skills of fire fighting.
The course began with theory. The three elements of the fire triangle, namely fuel, heat and oxygen keep a fire alive. A demonstration involving the different types of fire extinguishers used for different types of fires took place. After the theory, each had a turn using an extinguisher to put out a fire.
Amidst clouds of smoke and smiles, we realised that it was indeed not so difficult to extinguish a small fire – provided the fire extinguisher was not empty!
It is good to have the knowledge but we do hope it will not be necessary to put the firefighting skills into practice.