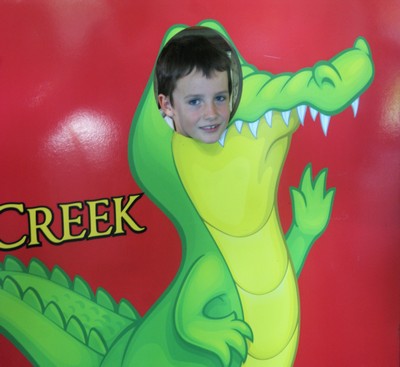 56 people set off for Crocodile Creek on Friday, 18 November, for the Foundation Phase Outing.

There was much excitement, some fears and a lot of talk about who knows more about crocodiles and snakes. There were even some whispers of, “I want to sit on a crocodile.”

We were warmly welcomed and shortly afterwards the presentation began. Animal handler, Uncle Johan, told us about the biggest crocodile on the farm, Mtagati, 5 metre long specimen. Uncle Johan brought a small crocodile which was about a metre long and made it lie on its back. He said that the crocodile would not move because all its sense organs are situated on its belly and none are on its back. He showed us its teeth and its mouth with no tongue. Each child could, if they wanted to, hold the small crocodile. On a short tour of Crocodile Creek we saw many, many crocodiles as well as a 75 year old alligator. It was enthralling to watch the crocodiles feed on chunks of mutton thrown to them by the handlers. After watching the animals feed, the children were catered for by staff at the Creek restaurant. They were served a scrumptious meal.

After lunch Uncle Johan brought out a massive African Rock Python which is known as Africa’s largest snake. He told us about snakes and of course everything made very real sense with a live snake in front of us. Afterwards the children could touch and hold the python.