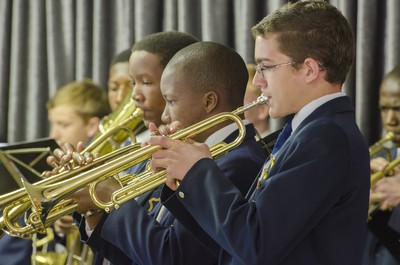 DSS ended the term with Term 2 Award Assembly on 24 June.

Award assemblies are always crisp and to the point which makes them pleasant to attend. There is an atmosphere of expectation and possibly apprehension because directly after the assembly the learners receive their term reports. This term was no different except that the hall had a new look.

The program was directed by Head Prefects, Sara Knieper and Noluthando Nhlabathi. The Foundation and Intermediate Phase learners rendered a song with the help of the Music Ensemble. The Bible reading from 1 Cor 13:1-7 &13 was read by FAST students, Ricardo Larson and Sibusiso Mbelu in Portuguese and English respectively.

Mrs Stegen presented the awards which acknowledged achievements in the FET Phase in the CAT Olympiad and the Computer Talent Search. The Ensemble also presented two delightful pieces during the program and the Brass Band concluded the assembly.

Congratulations to all the learners for working hard this term.