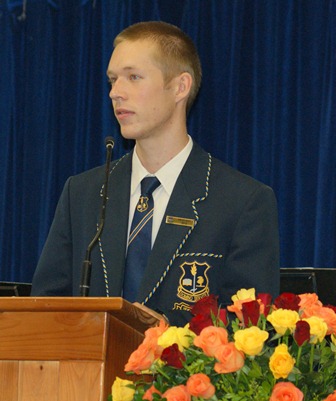 Our first quarterly Award Assembly for 2012 took place on 22 March. Program Directors were Head Prefects, Luc Hussling and Lungile Mkhize. The Bible reading was done in Korean and IsiZulu by Eun Jeong Lee and Sikhulisile Khuzwayo. Classes in the Foundation and Intermediate Phases presented poems, both were incidentally in Afrikaans!

Due to the fact that many school activities are in the initial stages, there were not many who had already achieved awards. A number of Intermediate Phase learners achieved Sliver Speed Stacks Certificates for Really Fast Time in the different stacks.

The 2012 House Captains were announced: