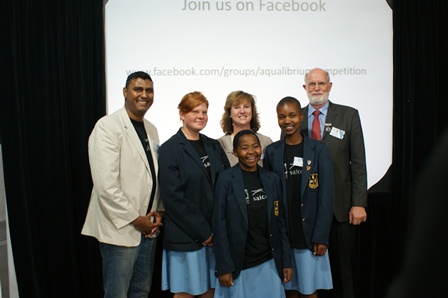 The finals of AQUALIBRIUM, the exciting SAICE-WRC Schools Water Schools Competition 2012 was held at the Sci-Bono Discovery Centre in Newtown, Johannesburg, on Friday 27 July 2012. This worthwhile competition never fails to excite the teams, spectators and everyone involved! The Water Research Commission (WRC) is the major sponsor for 2012.

The 2012 champions with 160 penalty points conceded, were from the Domino Servite High School in Pietermaritzburg – they were in the second place in 2011! The team members were Zama Nyende, Nntenga Memela and Bianca Coetzee. In the second place was the Steelcrest High School from Middelburg, Mpumalanga, with 180 penalty points. The team members were Hoteb Nkadimeng, Trinity Nkosi and Nokphiwa Mokoena. In the third spot was the Hoërskool Grens from East London (Buffalo City) with 315 penalty points achieved by Niel Verwoerd, Justin Vorster and Tommie Terblanche. They all shared the prize-money of just more than
R17 000-00.

Winners of the regional competitions come to Johannesburg from as far as Bloemfontein, Cape Town, Buffalo City (East London), Pietermaritzburg, Richards Bay, Nelson Mandela Bay (Port Elizabeth) and Middelburg in Mpumulanga, to battle the local winners for top honours. Learners are flown to Johannesburg and accommodated in a good hotel – an experience that these young people and some of the educators will never forget! For most this is a first experience of the ‘big city’.