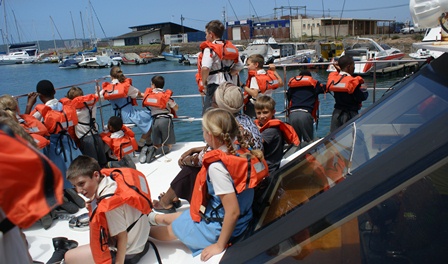 Education takes place beyond the classroom walls and this type of education can be a great deal of fun. This is what happened when the Intermediate Phase learners visited a number of Durban venues where they learned a lot and had much fun.

On 24 February 31 learners and 4 teachers, accompanied by 2 drivers began the day at the Durban Harbour Sugar Terminal on Maydon Wharf. After an interesting introduction and a visual show, we were taken on a tour through the sugar terminal. This terminal is the largest of its kind in the world. The term ‘mountains of sugar’ took on a new, literal meaning. The learners were given a taste of sugar made from Brazilian sugar beet that was being offloaded from a ship into the terminal.
The next port of call was the Durban Harbour where we were taken on a short harbour trip on the yacht ‘My Girl Too’. It was fascinating to see the massive cargo ships up close and watch them being loaded.
Well. everything was scaled down from maassive to mini when we visited Mini Town on the beach front at the next stop. There we had lunch, courtesy of McDonalds, and we visited the interesting town of Durban scaled down to a ratio of 1:27. The town hall was there, the Home of the Sharks and the Sugar Terminal. Just before we left we walked along the pier and viewed the sea up close. We didn’t get into the water as the beach was strewn with blue bottles!