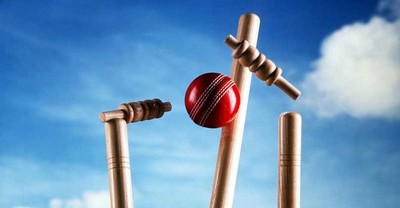 DSS won the toss and elected to bat first. Jacques Gouws and Marc Wälz opened the batting. The Hermannsburg captain bowled an excellent ball with the last ball of his second over. The ball came back in off the seam to clip the bails and Marc had to walk. Pierre came in and together, Jacques and Pierre put on 90 runs for the second wicket. Pierre succumbed to a good catch on the mid-on boundary having scored 35 runs. With the help of some of the other batsmen and the extras, DSS scored 201 runs for 6 wickets in 20 overs. Jacques scored 90 runs not out. He hit 9 fours and 5 sixes.
Hermannsburg came in to chase the total of 201 runs. Jacques and Pierre again opened the bowling. Pierre bowled a wide with the first ball of his over (the 2nd over of the match) and then bowled a fast low full toss to dismiss their opening batsman. Pierre took a total of 3 wickets. Jacques took 3 wickets and Marc and Arno took 2 wickets each. Philip Green took a low-down, diving catch to eliminate the other opening batsman. The wickets tumbled at a regular rate and Hermannsburg were all out for 51 runs.
Result: DSS won the match by 150 runs.