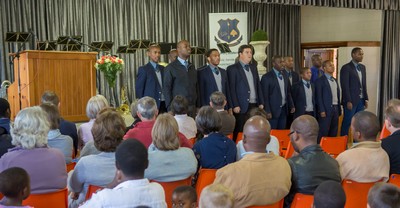 Our final assembly for a bustling, varied and hectic third term took place on 27 September.

As usual, the final assesmbly of the term is an open assembly where family and friends are welcome. This assembly sees the achievers of the term awarded with certificates, merits or colours. Luke Allen, the Deputy Head Boy and Sehliselwe Hlongwa, a Grade 12 learner, ably handled the programme. The Bible reading was done by Lisu Mabuyakhulu and Jayke Maclean in IsiZulu and English from Psalm 32:1-6. The FAST students presented an inspirational item in song.

Hockey, Netball and Soccer players recieved awards as well as Cross Country athletes. A number of learners received awards for their achievements in the Foundation Phase Champion Olympiad, ATKV Afrikaans FAL Olympiad and the Mathematics Olympiad. Learners who participated in the Regional Bridge Building competition were also awarded. Congratulations.